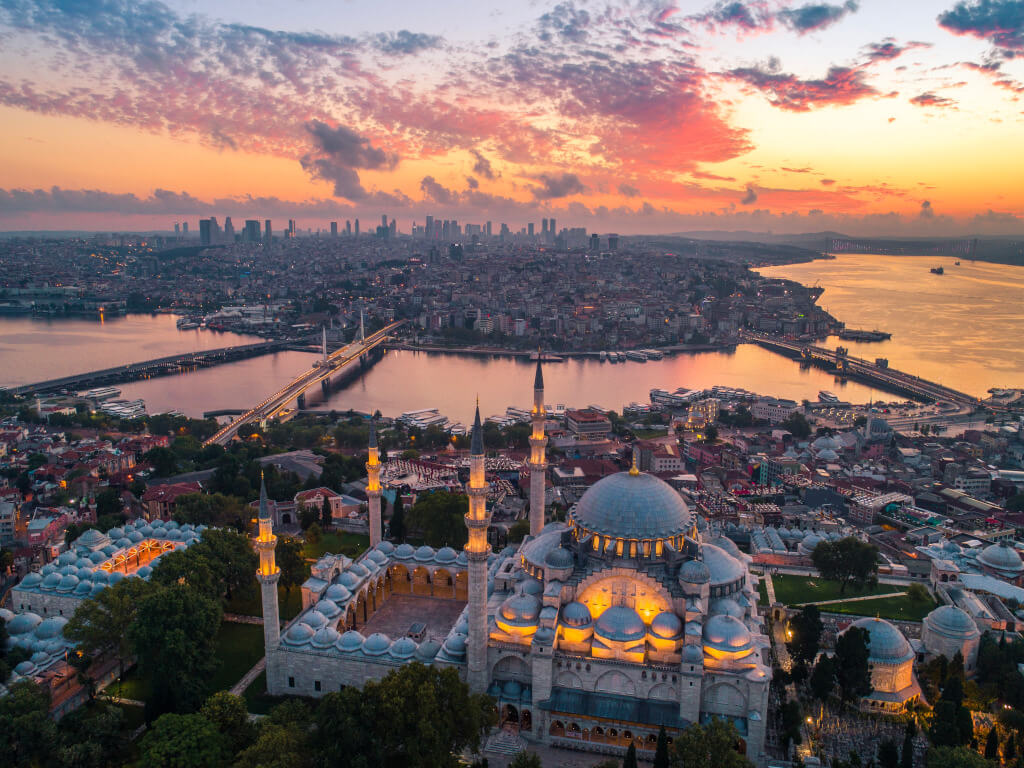 With a rich history spanning millennia as the center of the Byzantine and Ottoman Empires, modern Turkey was founded in 1923 by Mustafa Kemal Atatürk (Father of the Turks) and is now a major regional power.  A secular state and a constitutional republic with a president as head of government, Turkey nevertheless has in recent years seen an increase in the influence of Islam and is a model of stability, democracy, and tolerance amongst Muslim-majority nations.  Home to 82 million people of all walks of life, ideologies, beliefs, and backgrounds, and speaking a number of different languages, Turkey is truly cosmopolitan and constitutes the world’s 16th largest economy.

Spanning both Southeastern Europe and Western Asia, Turkey is culturally a mix of Europe and the Middle East, with its largest city Istanbul the only city in the world located on two continents.  Bordered to the east by Armenia, Georgia, Iran, and the Azerbaijani exclave of Nakhchivan, to the southeast by Iraq and Syria, and Greece and Bulgaria to the west, it is also surrounded on three sides by water- the Mediterranean Sea to the south, the Aegean Sea to the west, and the Black Sea to the north.  With its central location at the crossroads of Europe, Asia, and the Middle East and its national airline flying to more countries than any other, destinations on six continents are easily reachable from Turkey.

Historically linked through its culture and predominant religion to the Middle East, Turkey has become increasingly integrated with the West through its membership in organizations such as the Council of Europe, NATO, the OECD, and the G20.  Although the majority of Turkey’s territory is located in Asia, most of its inhabitants consider themselves Europeans and aspire to becoming part of the European Union.

With historic souks, mosques, and ancient ruins existing side-by-side with a modern infrastructure, dynamic cities, the world’s largest airport, and Mediterranean resorts, Turkey’s diverse landscape, culture, and wide range of activities have made it one of the most widely visited and most popular countries in the world for years.

Article 20 of the Executive Regulations on the Turkish Nationality Law, which provides for exceptional cases under which Turkish nationality may be obtained, was amended by Presidential Decree No. 106 (Decree) on September 19, 2018, going into effect on the same date.

A new requirement for Turkish citizenship was introduced in Article 20 of the Code of Laws. Accordingly, if the Capital Markets Board determines that the foreigner has purchased a share of the Real Estate Investment Fund or the Investment Capital Fund with the required minimum amount of foreign currency or its equivalent of Turkish lira, provided that the share is owned by such a foreigner for at least three years, Turkish citizenship can be obtained upon presidential decision.

There are one way to obtain citizenship in Turkey by investment

To qualify for citizenship of Turkey under the Real Estate Option of the Citizenship by Investment Program, an applicant must purchase authorized real estate with the minimum value of $ 250,000, which may be resold after 3 years

The applicant can obtain a Turkish passport by bank deposit of $ 500,000, which can be recovered after 3 years.

The applicant can obtain a Turkish passport by purchasing government bonds worth $ 500,000, which can be returned after 3 years.

Notice World Gate professional fees, official application forms, certification of citizenship and passport, courier & other disbursements are the only other costs associated. A full-itemized quotation with no hidden costs is provided.

After down payment of the professional fees required to open your application, World Gate will provide assistance and advice in regard to the collection of the required documents. We also will guide you through property options in Turkey that fully satisfy your requirements and start preparing property purchase documentation required for the residency application.

World Gate will help you choose a valuation expert that is licensed by the Capital Markets Board of Turkey and get your chosen property evaluated. The purchase must be completed by registering the applicant's own name on the property and annotating the promise to not sell the property for at least three years.

After a safe purchase and valuation and before the completion of the application, the Ministry of Environment and Urban Affairs will confirm if the value of your investment both in the registry and in valuation exceeds $250,000. A residence permit shall be taken from the Directorate General of Immigration Authority that is specific for investors.

World Gate will complete and check the documents of your application and send them via mail to İstanbul for an official check. After your documents are complete, the evaluation process for the application will be initiated by the Directorate of the Civil Registry of the city in which the residence permit is taken.

The General Directorate of Civil Registry will forward the application file to the National Intelligence Agency of Turkey, and the Agency will conduct a security background check. If the security background report by the National Intelligence Agency confirms the suitability security-wise, the Ministry of Interior will validate the application and direct it to the Presidency of Turkey.

Please Note The estimated time of receipt of citizenship approval is based upon the Turkish government’s due diligence processing time.